Love in the Time of Fentanyl is a documentary that follows some of the personalities involved in the Vancouver harm reduction scene. It is now screening at select venues across North America, which is updated regularly on the film’s website. Below is a blog from Ronnie Grigg, the Founder and Executive Director of Zero Block Society, and one of the focuses of the film. 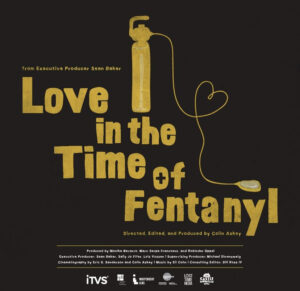 A new documentary has been making the rounds at film festivals and local screenings that features a look at the daily activities of Vancouver’s pioneering Overdose Prevention Society (OPS). It follows a few of the personalities involved, including a part of my own story. Entitled Love in the Time of Fentanyl, filming took place mainly in the early part of 2019. It started as a short film about a mural that Smokey Devil, a famous Vancouver street artist, painted of me. He called the mural the Narcan Jesus- it was a cool story of the history Smokey and I have which is part overdose intervention, part history of relationship, and part funny story of some random young person calling me Narcan Jesus years prior as I was attending to multiple overdoses on my own in an alleyway.

The film is the first feature length documentary by Colin Askey. Colin and I have known each other for many years. We first came to know each other as harm reduction workers in Vancouver’s Downtown Eastside over 10 years ago. He and his wife Kailin, known for supporting the emergence of many innovative harm reduction programs herself,  have since relocated to New York City where Kailin remains involved in harm reduction work. She in fact has been heavily involved in opening the first sanctioned supervised consumption facility in the US. Get at it, America- lives are at stake. With Colin’s background in film he became involved in doing short documentaries featuring the various programs in Vancouver and then later in NYC. We affectionately called him “The Propagandist” for how effectively he represented the story of the complexities of harm reduction work. He was well positioned to do this film because of his pre-existing relationships with many of the people in the film and his knowledge of harm reduction work. 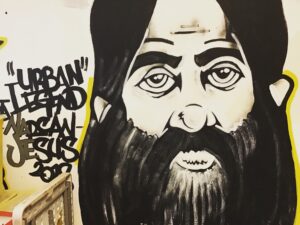 As he tried to capture the history of Smokey’s mural the filming began to grow to feature the vibrant life of the Overdose Prevention Society, with its art programs, its peer focussed community response, and mainly its critical life-saving service of overdose prevention. And the funding also grew, as Colin was able to secure funding through Independent Television Service (ITVS– the funding arm of PBS, the US public broadcaster) as well as the Sundance Institute. Also important has been the support of Executive Producer Sean Baker, an accomplished Los Angeles based film maker known for such films as Tangerine, the Florida Project, and most recently Red Rider. Sean had been working in Vancouver pre-Covid trying to support the stories and efforts of harm reduction work in the face of an ongoing public health crisis that has taken so many lives. A part of that effort brought Sean to OPS as a volunteer.

The film premiered in May 2022 at DOXA documentary film festival in Vancouver where Colin suitably won the award for best Canadian Director. It also screened at Northwest Fest in Edmonton in May. After a few quiet months the opportunities for screenings have increased- we were able to embark on a small tour that included Nelson and Kamloops in British Columbia, where Dana MacInnis, one of the featured storylines in the film, and I were able to attend. Then on to a screening in Thunder Bay, Ontario, at Vox Popular Media Arts Festival where Norma Vaillancourt, another featured storyline, was able to participate in a QnA in her hometown along with me. Then Commfest Film Festival in Toronto and Cinefest in Sudbury, my hometown. The response has been overwhelmingly positive with strong community support. In Kamloops the screening coincided with local International Overdose Awareness Day activities which brought approximately 400 people to the event. We were given the experience of a standing ovation of which I’ve never experienced before. It was deeply moving. In all of the places where there have been screenings, there have been opportunities for me to introduce myself to people and organizations heavily involved in overdose and homelessness response. 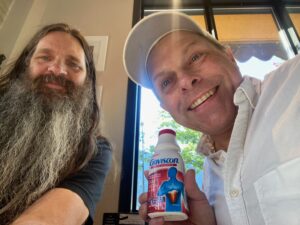 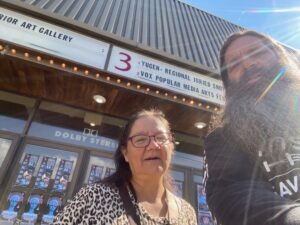 This film experience has fit extremely well with my vision for Zero Block Society, the harm reduction non-profit that is emerging into a real thing. With “Support the Work, Support the Workers” being the guiding mandate, my hope has been to bridge the knowledge of lived experience outside of the Downtown Eastside where I live and work. This bridge is mainly meant for harm reduction workers in other communities, but also for those outside of the harm reduction sphere who want to support and further educate themselves.

Love in the Time of Fentanyl has been an effective experience to allow people to witness the intensity and challenges of responding in a constant state of crisis, but also the deeply compassionate and humanizing aspects of the people responding to their community’s needs. The feedback has been beautiful and affirming- one person expressed to me that the storytelling had them cheering for the characters in the film, another person described it as a timely gift that galvanized their understanding of harm reduction and the deep potential found in the compassion of meeting people where they exist without the judgement or expectation of abstinence only based outcomes.

We’re hopeful for ongoing community engagement. Currently the film is able to be screened in Canada. We’d encourage any community groups or festivals to reach out with your interest. It will premiere in the US at DOC NYC, the largest documentary film festival in the US, on November 15 with an additional screening November 17 which I’m hoping to attend. Also it is beginning to be screened internationally, specifically in Ireland and hopefully more (Hello Mexico, Australia,  other parts of Europe, still hoping to get out your way). An exciting aspect of the American support is that it will be broadcast as an episode of Independent Lens on PBS on February 13 and will be preceded with a month of pop-up screenings throughout the US. Those pop-up screenings will support community conversations in many US regions, many of which I hope to join.

This is an exciting turn of events and a necessary emergence of the story of harm reduction work. We always appreciate the support we receive as this film tours and as the work of Zero Block increases. If you’d like to support this ongoing work, please do. There are two readily available ways to do so- 1. talk about us through social media and through your community networks, and 2. Financially support us through donating to Zero Block. Your support matters deeply.

To a more compassionate future